“AKIRA JEGOGU-DAN Ⅱ”, Geinoh Yamashirogumi’s live concert aiming to make a further stride into the new form of music “JEGOGU”, was successfully concluded with thunderous applause. We heartily thank those who joined and shared this experience and those who gave us various kinds of support. 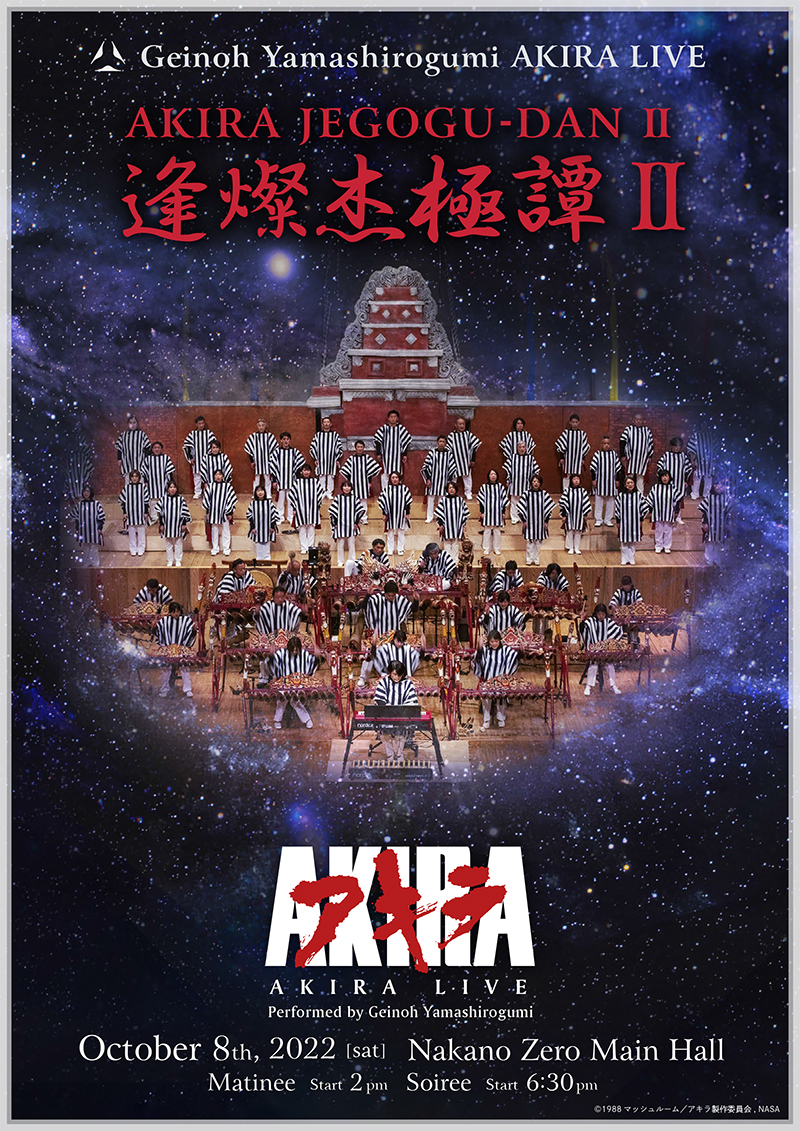 “AKIRA” (released in 1988) , directed by Katsuhiro Otomo, is a milestone in the history of anime films. “Symphonic Suite AKIRA” (composed by Shoji Yamashiro), which colored the worldview of the film, continues to fascinate people around the world even today, depicting a novel near-future world by making full use of the diverse sound expressions on earth.
The “Symphonic Suite AKIRA” was long said to be impossible to be performed live due to its exquisite composition of studio recordings. It was a great challenge to make this reborn as a new concert hall live work and Yamashirogumi succeeded this by fusing voices, keyboard instruments and electronic instruments into the roar of the Balinese gigantic bamboo percussion ensemble “Jegog” at its concert “AKIRA JEGOGU-DAN” in last spring.
Despite its status of premature prototype, the performance made a miraculous success unprecedented in the history of Yamashirogumi, as evidenced by many audiences wiping tears. This experience made Yamashirgumi confident of the greater potential and possibility of “JEGOGU”, a new form of music.
Yamashirogumi was subsequently invited to participate in the “Bali World Culture Celebration”, a YouTube event hosted by the Bali Provincial Government. We posted a video work created through a drastic reconstruction of this music and recording and filming at a concert hall. This work has been renewing record of the largest number of views among all participating groups.
The new form of music “JEGOGU” was further developed and established as the sound of every one of bamboos that make up Jegog was re-examined, and the acoustic design was fundamentally renovated. It is this “AKIRA JEGOGU-DAN II” where the new form of music “JEGOGU” will be unveiled. We hope you will experience the sound world of “JEGOGU”, filled with unprecedented vitality, destructive power, and receptiveness.

Chapter II
逢燦杰極II AKIRA JEGOGU II
“AKIRA JEGOGU II” will be the first work to be released under the new form of music “JEGOGU”. The music of “AKIRA” will explode in empowered revolutionary sound, including live premiere pieces.
Performances: “Kaneda”,“Battle Against Clown”, “Shohmyoh” (“Shihosan”, “Shiharamitsusan”, “Shogon Darani”), “Exodus From the Underground Fortress”, “Requiem”, and other from “Symphonic Suite AKIRA”

The Birth of “JEGOGU”, a New Form of Music

Jegog, a gigantic bamboo percussion ensemble from Bali, Indonesia, is consisted of long and thick bamboos grown from the bounty of nature. They are aligned like a set of pipe organ, and produce five octave sound ranging from powerful, super-heavy bass sounds as if they were roaring from the depths of the earth, to light and high notes.
Shoji Yamashiro, the leader of Geinoh Yamashirogumi, has discovered that the sound of Jegog has an amazing receptiveness which will envelop a variety of sounds, including human voices and electronic instruments, and Jegog will attractively harmonize them in an symbiosis. To take advantage of this receptiveness, he developed a pentatonic scale Jegog based on the traditional Balinese four-note scale jegog, and modified the instrument to enable the performance of multiple temperaments. Furthermore, by adopting the latest acoustic technology, he has also succeeded in increasing the power of sound of Jegog, which encompasses over an ultra-wide bandwidth.
This is how “JEGOGU”, a new form of music was born. It is filled with unprecedented fascination coming from the fusion of variety of sounds, including human voices and electronic instruments, with Jegog at its core.